This series is a retrospective on my 2020 Colorado Trail thru-hike turned dirtbag fairytale.

I felt the thrill of heading to trail and beginning my thru-hike gathering in my limbs as we sped down the interstate toward the Rockies and Denver’s skyline faded into the horizon at our backs. Even as we approached the trailhead at Waterton Canyon, I was in a state of disbelief that I was actually going to start the Colorado Trail after months of pandemic induced uncertainty. In fact–if it hadn’t been for COVID, losing my job, and forcibly relocating–I wouldn’t have been in a position to thru hike at all.

When we arrived at Waterton Canyon, the gates were shut. A sign informed us that the area was closed but provided no explanation as to why. I had read about an alternate starting point at a place called Indian Creek Trailhead, but that would mean skipping a few miles including the northern terminus of the trail. I’m not a purist about covering every single inch of trail in a continuous footpath. I take a certain amount of pride in not being a purist. But with the terminus just within reach, we decided to crawl under the fence and see how far we got. I would not recommend this approach.

About twenty-five yards later, we were promptly chased out by a grumpy old man in a big white pickup truck. He drove alongside us at an achingly slow pace, forcing us to retrace our footsteps and look sufficiently penitent. The moment Megan and I reached the gate that partitioned off the park, a car pulled up and another thru-hiker jumped from the passenger seat. He and I were wearing the same shirt in different colors. Mine was gray whereas his was a cobalt blue that matched the color of his eyes. I liked the way he started speaking to us with a casual familiarity, without a preamble of any kind, “So what’s the deal?”

His name was Chris. We explained the situation and he offered us a ride to Indian Creek Trailhead. His ride was a Denver local, named Kevin, with a car affectionately titled Black Betty. Kevin seemed unfazed by the prospect of chauffeuring a couple of additional hikers and I felt the wondrous relief that arises when rides or other forms of trail magic miraculously materialize.

By the time we reached the Indian Creek Trailhead, it was nearly noon. I felt wound up with energy that yearned to be expended and soothed by the sensation of my trailrunners pressing into the dirt. As I readied myself to start down the trail with Megan and Chris, I realized we weren’t the only thru-hikers setting off. A little ways ahead, just before the narrow isle of trail disappeared into the forest of dark green pines, I recognized the golden blonde hair, the skinny black backpack, and the long legged strides of the man who had been on my flight yesterday. I thought about calling out to him but he was already vanishing into the trees. 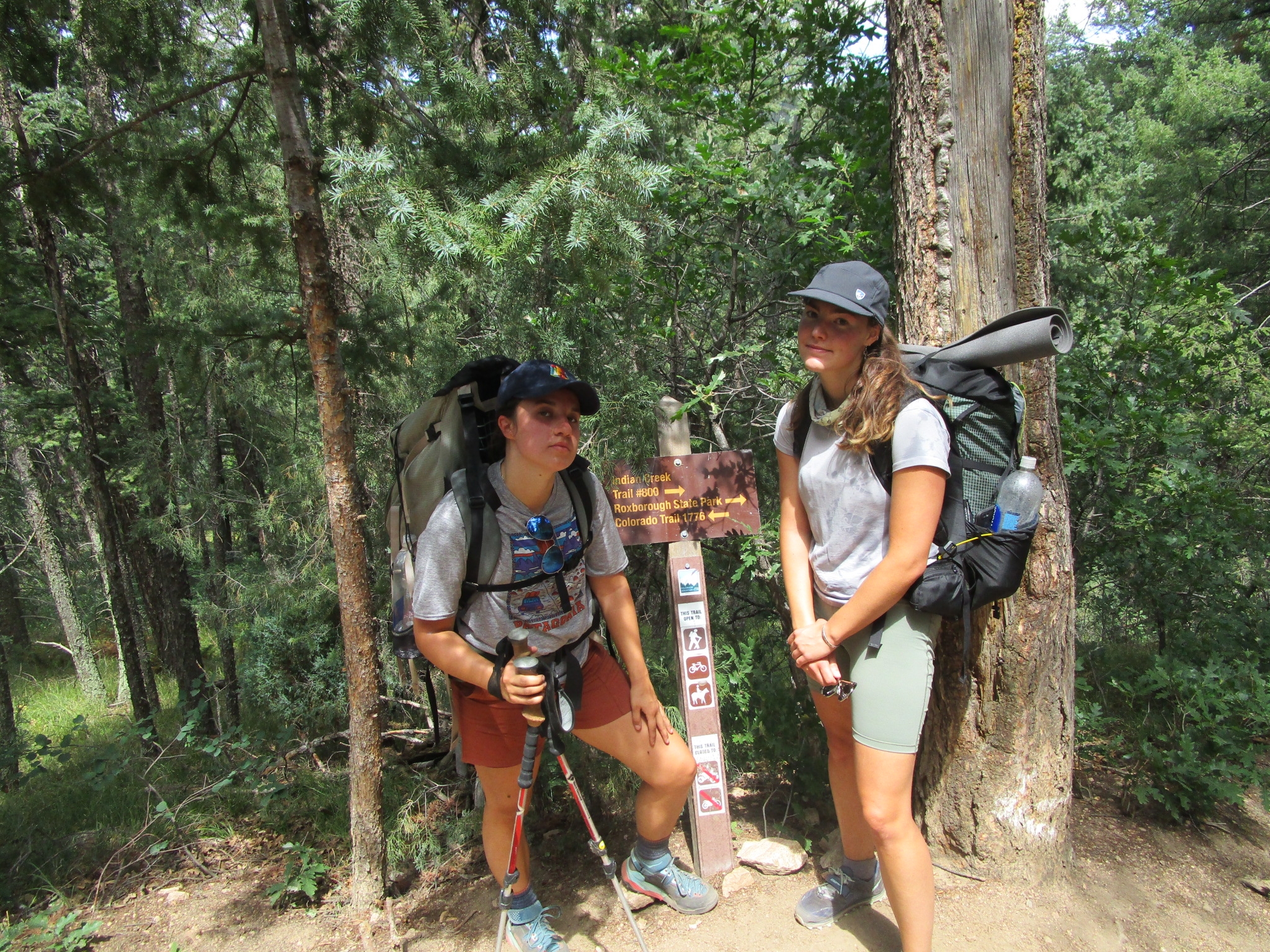 Megan (left) and I reaching the Colorado Trail via Indian Creek Trailhead after being chased out of Waterton Canyon.

Chris, Megan, and I started down the trail feeling energized despite our lack of sleep and the alcohol that still lingered in our respective nervous systems. We climbed into the mountains and into the sky. Six thousand feet of elevation and counting. My gaze and my mind worked intently at absorbing the color of the foliage, the crispness of the alpine air, the inestimable number of shapes and textures unique to this particular parcel of earth. In the late afternoon, fissures of thunder cackled overhead. The accompanying raindrops were cold and fat but I was grateful for them as my body sweated under the weight of my pack. It wasn’t easy to eat. Between the altitude, anxiety, and my lack of appetite, it was all I could do to keep myself functioning. Megan and Chris’s conversations were my antidote, deftly redirecting my thoughts away from my physical discomfort.

In the beginning sections of the CT, water was a little tricky. After crossing one barely trickling seasonal stream, which was truthfully more of a stagnant pool than a stream, we knew we’d be headed to the next water source, the South Platte River, to camp. We crested the highpoint for the day, a final ridgeline that precedes the lengthy descent to the South Platte River, and saw miles of trail stretched out ahead–exposed and inviting. I periodically wondered how many other hikers were out there. I wondered where the hiker I’d seen earlier had gotten to and where he would camp. If he would stop at South Platt or press on. 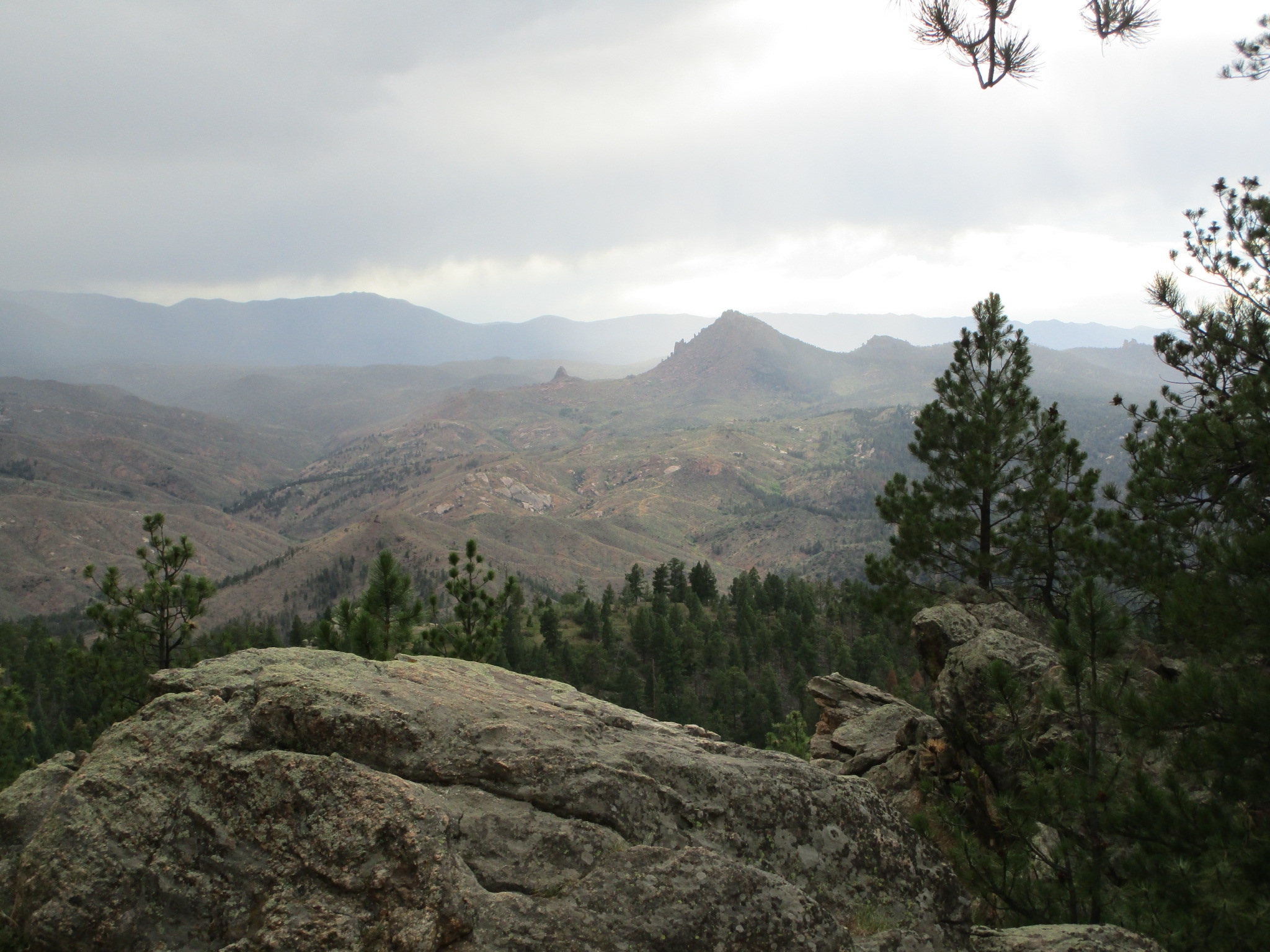 When Megan and I reached the river, we were shocked by the sheer number of tents clustered on the hill above the water. Regulation prohibits camping directly on the river bank and as a result, all the backpackers were huddled together in previously established patches of earth up on the knoll above the water. Megan and I washed our faces in the river, collected water, and waited for Chris to join us. We deliberated together about going a bit farther, as I am almost always inclined to go a bit farther, but we ultimately decided on staying at the South Platte.

I wound my way through the crowd of hikers in search of a relatively flat tentsite and, as I did so, I noticed all the different types of tents, tarps, and shelters represented. I also noticed a familiar blond erecting a single person tarp tent, and finally shouted, “Hey, you were on my flight yesterday!”

His mouth spread into a wide smile and I knew he wasn’t surprised by my statement.

“Yeah, I tried to talk to you,” he said. That surprised me.

“Oh yeah? I really got that impression from the way you hightailed it off the plane.”

The other hikers, who I hadn’t yet met, looked a little stunned and unsure of how to interpret my playfully disparaging remark. Megan balked at my side and whispered, “Jesus, Isabella. be nice” He himself didn’t seem especially concerned but before he could reply, I turned away and went back to searching for a campsite.

That night, as the full moon loomed, pearlescent and pregnant, her low hanging beams awoke me through the cover of the rain fly. It felt right to be sleeping outside again. It felt right to be there, just then. Some innumerable, unnamed forces came into alignment in that moment and I finally felt a moment of perfect peace. Mile 17.

Dawn and her accompanying choir of birds broke the morning silence. Without words passing between us, Megan and I began breaking down camp. I was appreciative of her haste, the way she rose effortlessly, with easy laughter and a determinedly optimistic disposition. Backpacks packed, we filled up our water bottles at the river’s lapping edge as another hiker, a young guy who had camped beside us, crept up and tentatively asked if he could hike with us.

This seemingly innocuous question—Can I hike with you?—hits a pressure point for me. On the PCT, I expanded an incredible amount of energy, time, and mental space figuring out how to gracefully (and sometimes not so gracefully) decline or discourage unwanted attention. Every woman I know is familiar with the craft of deftly rejecting uninvited sexual advances or reflexively enduring uncomfortable attention in an effort to avert awkwardness or outright violence. Jennifer Pharr Davis, who set the fastest known time on the Appalachian Trail in 2011, describes dodging a clingy male hiker during her first thru-hike of the AT by hiding among vegetation along the trail. Which might have been humorous if it weren’t so cringy.

One of the reasons I am so enthralled with the outdoors, and with thru-hiking specifically, is because it is one arena, in a world that is dominated by men, where my strength and independence are not just normative but necessary and necessary.

So even though this young man was, in all likelihood, looking for a bit of company and conversation—I wanted to make clear that I wasn’t feeling interested in offering either and I wasn’t under any obligation to do so.

I looked at Megan, who blinked back at me, and then gave a bumbling response which I think concluded with the words, “I’d prefer not to.”

Megan and I—moving at our own respective paces—climbed up and into a series of exposed bald sections that had been burned by a forest fire. It was dramatic and beautiful in a visceral sense, but the sun’s unobstructed force was ruthless. The light and heat leeched energy from my bare arms and legs. A few hours into the day, I’d reached a point of fatigue I knew I wouldn’t be able to recover from without generous amounts of sleep, shade, and electrolytes.

I chided myself as I hiked, frustrated at my exhaustion. Frustrated at myself for choosing to wear a cute acid-washed t-shirt in place of my dorky gray sun hoodie, which would have offered some protection from the sun’s severity. I still hiked hard and fast but I found myself stumbling into breaks and on the verge of blacking out. It was irritating and at the same time inevitable. I drunk water. I forced myself to eat. Woefully recalled that on the PCT it had taken nearly a week before the nausea resolved itself and my stomach had adjusted to a diet of exclusively processed backpacking food. I tried to breathe through my nose in an attempt to spare my parched throat, beseeching my body to acclimate more quickly to the altitude and intense sunlight. 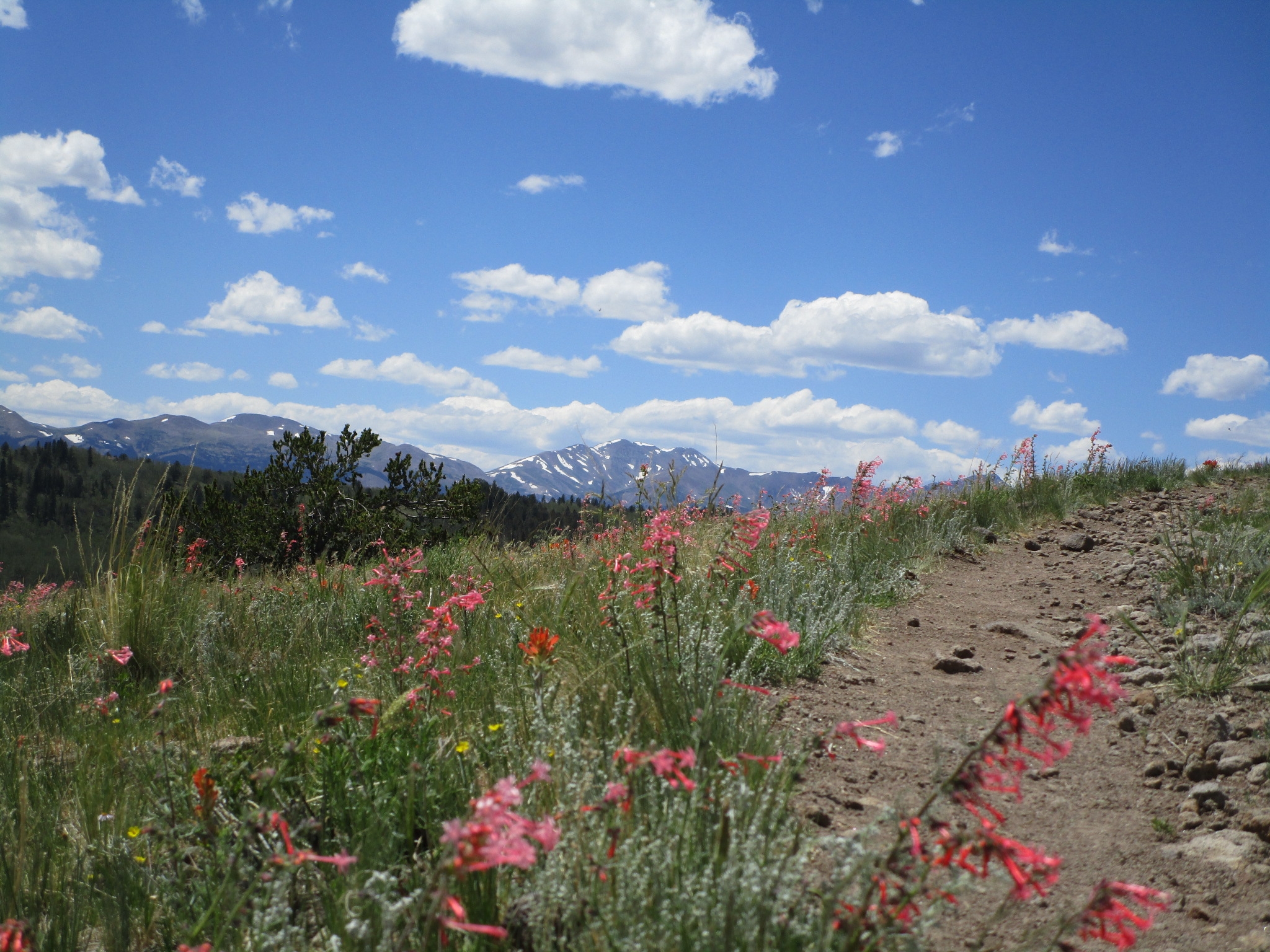 Intermittently, small patches of trees would appear and hikers would cluster together in these treasured spots of shade. the beginnings of highly trafficked trails are often this way; Featured by centipedes of hikers who spiral into a clump at natural meeting points—shade, water sources, or trail magic. With so many people starting off from the same point and confined to the same skinny ribbon of trail, it takes time for differing paces and preferences to emerge and then to sort the pack by creating distance between individuals and groups.

At the crown of the first climb of the day, I stopped beneath a little outcropping of fir trees. immediately, I pulled off my shoes and socks, reclining backward into a dead log. Megan appeared, then cobalt-eyed Chris, and eventually a handful of other hikers, all of which drifted into the cluster of firs to share in the shade.

Last to arrive was the blond bvote from the plane who finally introduced himself as Matt. He came bounding over the crest of the climb looking energized and effervescent beneath the same sun that was turning me into a cantankerous raisin. He was fast and I noticed that. Noticed in the same way that I appraised his small pack and strong legs. Noticed in a complicated way that he recognized a kindredness between us yet at the same time felt fiercely competitive.

My first impression of Matt was that he was introspective and reserved. He would glide easily into lines of conversations that caught his interest, always maneuvering gracefully and speaking with a certain gentleness. I learned that he was originally from North Carolina. Since graduating college, he had been doing seasonal jobs as a way to travel and expose himself to new places and experiences. That most recently, he had lived and worked on boats because the ocean was his great love. He struck me as thoughtful, highly intelligent, and considerate. Yet also aloof. As though, at any moment, the spark of his interest might diminish, his attention might abruptly shift, and then he would leave as slyly as he arrived. Mile 36.