Simon Thomas has revealed that he and his son Ethan had therapy sessions after his wife Gemma died of blood cancer, with her symptoms being dismissed as ‘stress’.

The Sky Sports presenter, 49, lost Gemma to blood cancer in 2017, just three days after she was diagnosed with adult acute myeloid leukemia.

He said his late wife had started to experience headaches, night sweats, bruising and fatigue but her symptoms were dismissed as stress-related when she visited her local surgery three times. 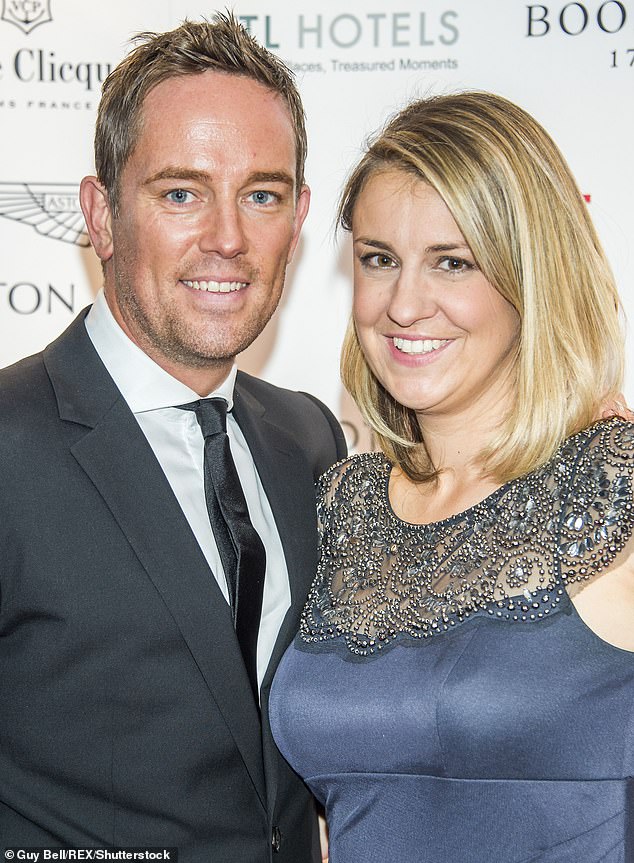 Grief: Simon Thomas has revealed that he and his son Ethan had counseling after his wife Gemma (pictured in 2015) died of blood cancer with her symptoms being dismissed as ‘stress’

In November 2017, she developed a bruise on her thigh and her headaches worsened, and she was later rushed to A&E but tragically died three days after her blood cancer diagnosis.

Simon said people aren’t aware of the symptoms of blood cancer like they are breast cancer, despite it being the fifth most common cancer in the UK with more than 40,000 people being diagnosed with it each year.

Speaking about how he dealt with his wife’s death, Simon said he and his son Ethan, 12, both had counseling sessions for around two years.

He told The Sun: ‘We both benefited from having people to talk to and we both spent two years working with our individual counselors.’ 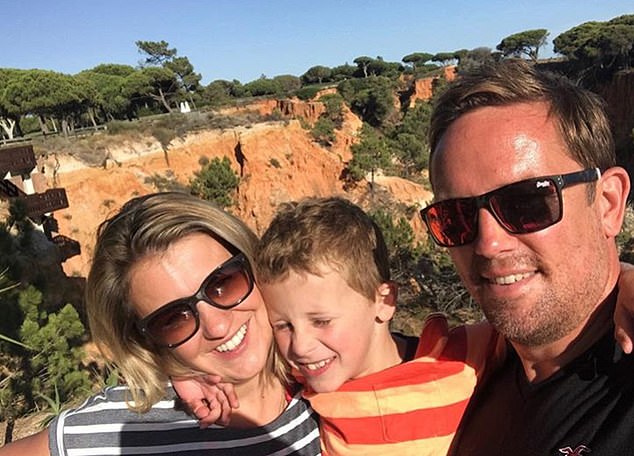 Tragic: The Sky Sports presenter, 49, lost his wife Gemma (both pictured with Ethan) to blood cancer in 2017, just three days after being diagnosed with adult acute myeloid leukemia

Simon said Ethan has had to develop emotional maturity and do a lot of growing up after tragically losing his mother at a young age.

The father said May is a difficult month for his family as it marks Gemma’s birthday, with Simon adding that they visit communal land by their old house’s garden on the occasion.

The former Blue Peter presenter said instead of visiting a graveyard, they visit a tree they planted in the spot near their old house beside the River Thames in May 2018.

Two years after Gemma’s death, Simon found love with legal professional Derrin Jebb, 31, and they tied the knot in a ceremony at Norwich Cathedral in July last year.

During the Covid-19 crisis, Simon lost his beloved father but despite their trauma, they are still raising money for charity and are on the waiting list to house a Ukrainian family. 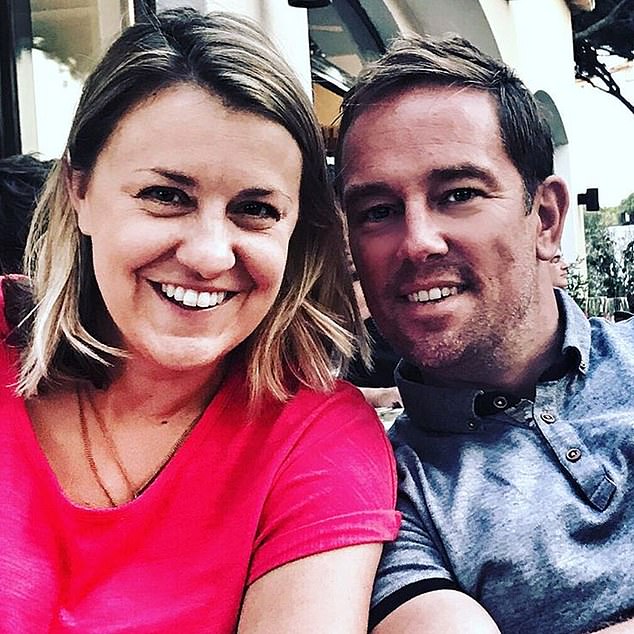 Cancer: He said his GEmma had started to experience headaches, bruising and fatigue but her symptoms were dismissed as stress-related when she visited her local surgery three times

Simon said his son Ethan was taught not to ‘take things for granted’ after the tragic loss of his mother and wanted to help Ukrainian families who have been forced to flee their war-torn country amid Russia’s invasion.

What is adult acute myeloid leukemia?

Leukemia is a cancer of the white blood cells. Acute leukemia means it progresses quickly and aggressively, and usually requires immediate treatment.

Acute leukemia is classified according to the type of white blood cells affected.

The 2 main types of white blood cells are lymphocytes, which fight viral infections and myeloid cells, which fight bacterial infections, defend the body against parasites and prevent the spread of tissue damage.

Acute myeloid leukaemia (AML), which is an aggressive cancer of the myeloid cells.

The symptoms of AML usually develop over a few weeks and become worse over time.

It’s not clear exactly what causes AML and, in most cases, there’s no identifiable cause.

AML is a rare type of cancer, with around 3,100 people diagnosed with it each year in the UK.

The risk of developing AML increases with age. It’s most common in people over 75.

‘[Ethan] understands lives being turned upside down so he’s been really keen to help, ‘Simon added.

Ethan has also raised funds for charity Grief Encounter, while Simon supports Blood Cancer UK and is currently promoting a competition for one person to win a £ 3million house in Cornwall.

He said his late wife Gemma died before his family could be supported by the charity, but spoke of the importance of people having more awareness of blood cancer and its symptoms.

As well as giving his help to the charity, Simon revealed that because he speaks publicly about Gemma’s death, he also has people who are grieving reach out to him online.

But the presenter said he has to be wary not to take on other people’s trauma when he receives messages detailing others’ heartbreaking stories to protect his own mental health.

Simon frequently talks candidly about his late wife’s tragic death and last month said his new wife Derrina Jebb struggles with ‘guilt’ in the lead up to the anniversaries of Gemma’s death.

Appearing on Kate Ferdinand’s Blended podcast, he said that he views the anniversaries of his first wife’s passing as simply a ‘marker in time’.

But Derrina feels the family should do more to celebrate her life for the sake of Ethan, who Simon shares with Gemma.

Simon said: ‘I think sometimes you struggle a little bit with guilt, in particular around anniversaries. I’m very comfortable with anniversaries as in I don’t overthink them.

‘I think the first year when you go through loss, those firsts are massive and every first is a hurdle to get over, but with time it becomes easier.

‘I’m not one who, any anniversary wants to do anything particularly significant. They’re just, for me, markers in time. But from Ethan’s point of view it’s a ‘Would you like to do something?’. ‘

Simon explained that while Derrina is often keen to mark the anniversary, Ethan often prefers a low-key day, perhaps sending a ‘balloon with a little message’ rather than a large event. 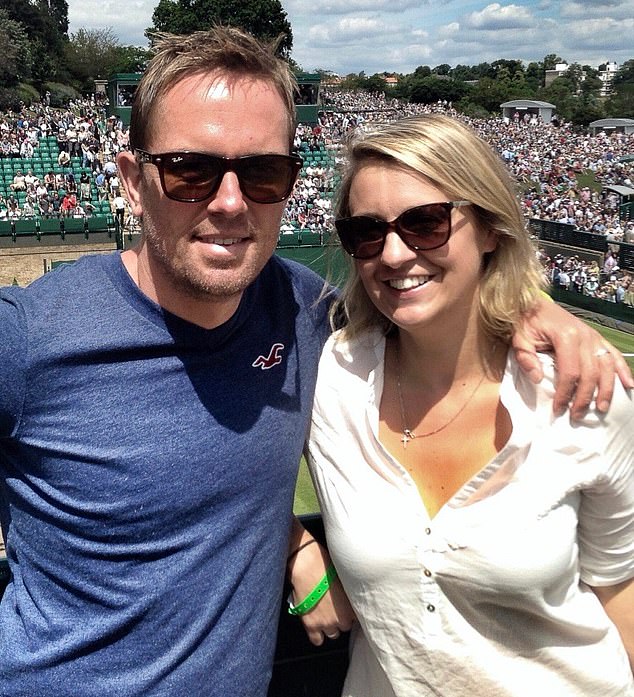 Kind: Simon said Ethan was taught not to ‘take things for granted’ after the loss of Gemma and wanted to help Ukrainian refugees, saying they are on a waiting list to house a family

‘I think sometimes she feels we should be doing more because of that guilt you feel, that maybe we’re not doing enough, and I try to reassure Derrina and say it’s fine’.

Derrina opened up about taking on her new husband’s grief, insisting that she was more emotional than Simon and Ethan at Gemma’s last two anniversaries, despite never having met her.

‘You just feel this real guilt and I definitely feel that especially the last two [anniversaries] I have probably been more emotional than you two [Simon and Ethan]she said.

‘It’s silly because I didn’t know Gemma, but you take on what everyone else is feeling in the wider circle.

‘I guess there’s a bit of sensitivity, but it’s also that empath just thinking,’ This is horrendous’. I definitely take on other people’s sadness and loss and I definitely get emotional. ‘ 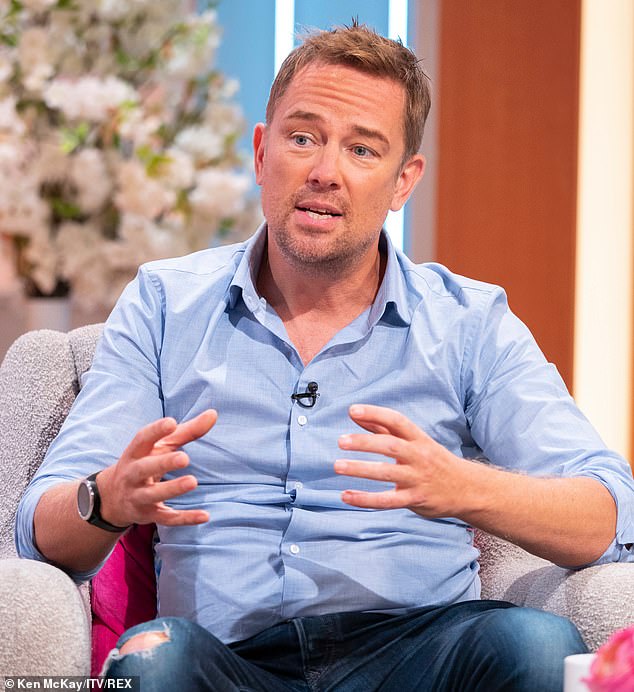 Awareness: Simon (pictured in 2019) said people don’t know the symptoms of blood cancer like they are breast cancer, despite it being the fifth most common cancer in the UK

She became emotional as she opened up about comparing herself to Gemma, admitting that the ‘little voice in her head’ often tells her that ‘Gemma would have done it better’.

‘But in your head, that little thing on your shoulder will say,’ She would have done it better, made a birthday really good or Christmas really good ‘and you’re so aware of that when you’re in that situation.’

Simon’s late wife Gemma Thomas tragically died in November 2017, a year after she was sent home for bed rest by her GP after visiting three times with flu-like symptoms. 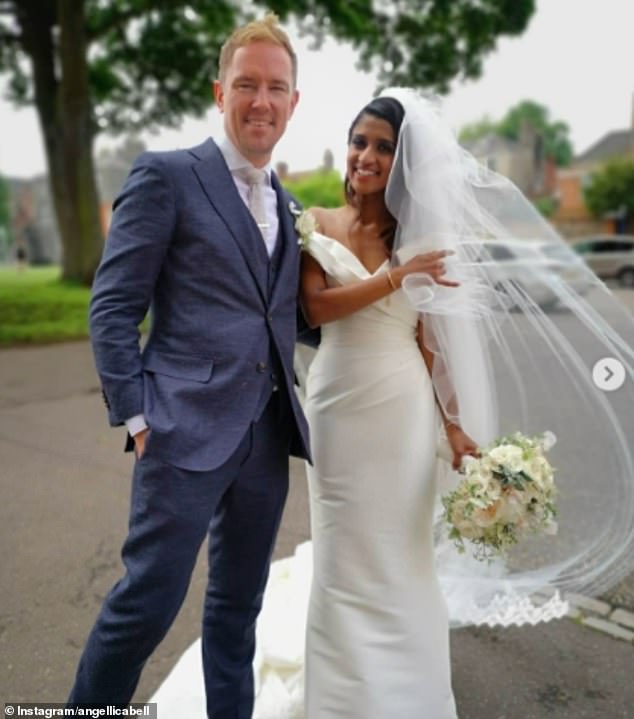 Two years after her death, Simon found love with legal professional Derrina (both pictured), 31, and the pair tied the knot in a ceremony at Norwich Cathedral in July last year

Marking Gemma’s birthday in May 2020, the TV personality thanked then-girlfriend Derrina for making him ‘happier than he dared to believe he could be again’.

Sharing a black and white snap of Derrina, Simon said he was ‘head over heels in love’, and said that his and his son’s life had been ‘blessed’ by Derrina, who he started dating in 2018 after reportedly meeting her through a church group.

Sharing the picture to his Instagram account, he wrote: ‘A very Happy Birthday to this very, very special lady. I can’t begin to express how much this lady has changed my life.

‘She’s loved me when I was hard to love, stuck with me when I’ve messed up, walked beside me when there were easier paths to tread and made me happier than I ever dared to believe I could be again.’ 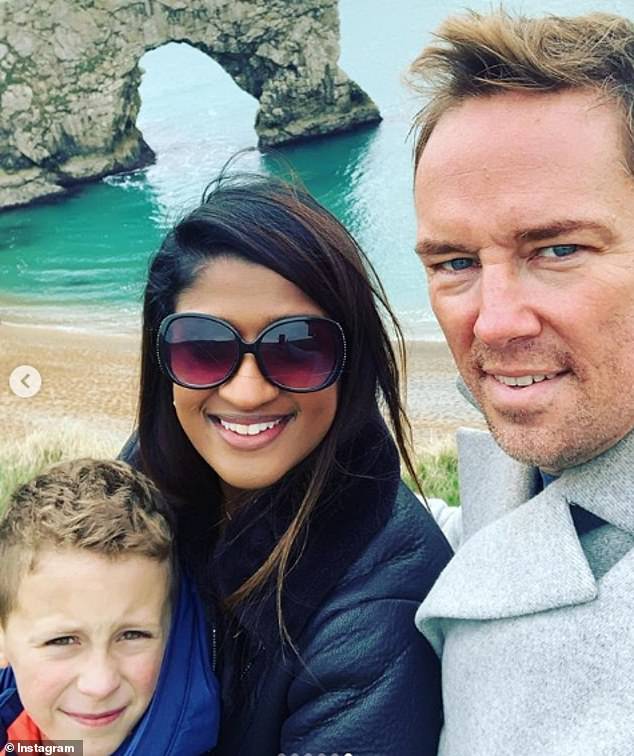 Joy: Marking Gemma’s birthday in May 2020, the TV personality thanked then-girlfriend Derrina for making him ‘happier than he dared to believe he could be again’